In Memory of Craig Wootten 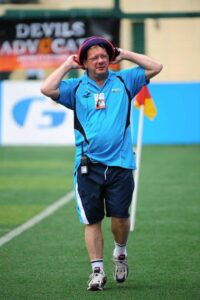 We are very sad to report to the section that Craig Wootten died on 6th January after a long fight against cancer.

For all of us that knew Woots he was a legend on and off the pitch and especially in the Sportsman’s Bar, where it did not matter who you were, Woots would share a laugh, a few stories and a lot of Carlsberg and Bundy with you.

For the record Woots was a formidable organiser who accomplished so much and always with the minimum of fuss. He was Rugby Section Chairman 2003-5, did 27 years as 10s Tournament Director, co-founder of the Sequins rugby team, legendary fixer and winner of 29 Craig Wooten Invitational Golf Opens and an extraordinary Hong Kong team manager. In recognition of his huge contribution to the Rugby Section and the Club, HKFC made Woots a life member in 2015.

He will be sorely missed. 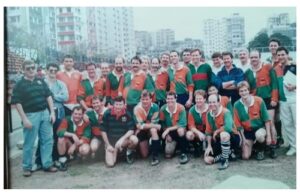 HKFC celebration on Saturday at 3:29pm

For those in Hong Kong, a minute’s silence will be held prior to all senior matches on Saturday, and all are welcome to come down to celebrate his life, laugh and tell a few stories in Sequins Corner.

Craig’s memorial will be held in Brisbane at the Centenary Memorial Gardens on Tuesday 17th at 12 pm which will also be live streamed at Craig Wootten(cmgcc.com.au) – to view the service use the password 8153.

Thank you to Don Rider for the information provided for this post. If you would like add to the tributes made to Woots, please reach out to Roshini Turner at [email protected] 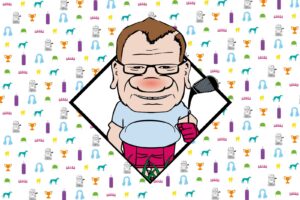 The Warthog and the Crocodile

They met so many years ago playing for their different teams,

Two leaguies without a sidestep, or that was how it seemed,

The croc ran at the warthog with intent to hurt and maim,

But warthog he destroyed the croc, at least that’s what he claims.

For many years in different shirts, they met and they did battle,

But in the bar after the game, it was beers and mindless prattle,

And many seasons of talking crap it seemed would never end,

But croc he joined the warthog’s team to play beside his ugly friend.

The warthog and the crocodile went on tour to play some games,

But on the way to Cape Town beer and bundies was the aim,

The warthog playing number nine and the crocodile fly half.

They played the Kaapsie Jimmies who were Cape Town’s boys in blue,

With props like Table Mountain and giant second rowers too,

Avoiding tackles, rucks and line outs was the order of the day,

But warthog gave the ref a Rolex, for sympathy we did pay.

Back in Hong Kong to play for Sequins, and the corner after every game,

Some say rugby was the winner, but they really didn’t care,

They’d play rugby and go drinking, it didn’t matter where.

There is no better feeling than playing rugby with your mate,

When fun and laughter and a hangover seem to be the only fate,

The friendship was forever, they would play for years and years,

But now without the warthog the crocodile sheds real tears.

Craig Wooten was truly a legend for around 30 years in HK Rugby in every sense of the word. As a player, manager, and administrator he selflessly gave 1000s of hours of his time to the rugby community, all without any fanfare. He was a founder of the Sequins; National Team manager for a number of the years when I was a player on the team in the 2000s; a HKFC 10s Tournament Director for something crazy like 27 years; and most deservedly a Lifetime Member of HKFC. He was a tourist extraordinare and I will never forget, for example, spending the ARFU Rugby Championship vs Japan, Korea and Taiwan in Bangkok with him over 10 days 20 years ago. He made every tour a truly memorable one in every sense of the word. Nor will I forget him taking me down to the store rooms around 20 years ago and generously giving me 100s of old, but hardly used uniforms, to help me first start rugby in Mongolia which has since flourished. He next had his contacts at DHL ship it all up north for free! What a guy! What a character! But always most professional in discharging his official duties.

A great guy taken too soon. Only have fond and funny memories – and lots of them.
God bless Melinda and family.

RIP Woots, you were an inspiration to many of us, your legend will live on
Condolences to Melinda and family

RIP Craig. Your sardonic grin will forever be imprinted on my memory.

Will be raising one in his honor in Dubai!

RIP Craig. I like to think that you are having a beer and catching up with Billy B.
Thoughts are with Melinda and family.

Very saddened by the news of Woots passing. Top man, big heart & great fun. Many happy memories. Thoughts & prayers to Melinda & family. I hope all of these messages give some warmth, sadly missed

Such sad news. As a non rugby player I only knew Woots from stories socially and a frequent introduction in a bar. Went on tour – but not a Wooten tour. Always wished I had. These Wooten tour stories will live forever and I’ll continued to laugh at them forever.
RIP.

Fly with the angels … and get the Wooten Invitational organized in heaven for when we come to join you …. RIP mate

So sad – underneath everything he was a teddy bear with a heart of gold – he always made you laugh and feel good. RIP Woots

Sad moment – Woots as your next door neighbour in Sai Kung for the best part of 10 years there were a lot of laughs and good banter. Miss you lots rest well.

RIP Craig. Thoughts and prayers are with Melinda and family. Such sad news. He will live forever in the memories of all who knew him.

We will miss you Woots. You have left us with great memories, especially your warm welcomes in the Sportsman’s Bar. Our condolences to Melinda and family.

Very sad news. A great character and a pillar of the Club. His enthusiasm and love of life made him a great guy to socialise with, as well as enjoying his great sense of humour and natural wit.
He will be sorely missed.

This really is sad news.
He did an immense amount of work for rugby and men like him epitomised the true spirit of the club and community.

Very sad news indeed. Craig was a good friend. Drank many beers with him in Sporties
May he rest in peace

He was a friendly member who liked to talk with the staff and loved to make them smile. We used to see him in the club during the annual rugby week before Covid, he came back with guests every time.

Very sad, he shall be missed. A great club man and he contributed a lot to both club and Hong Kong rugby over the years. Bundy and Coke in a takeaway cup from Sportsman would probably have been his last order…