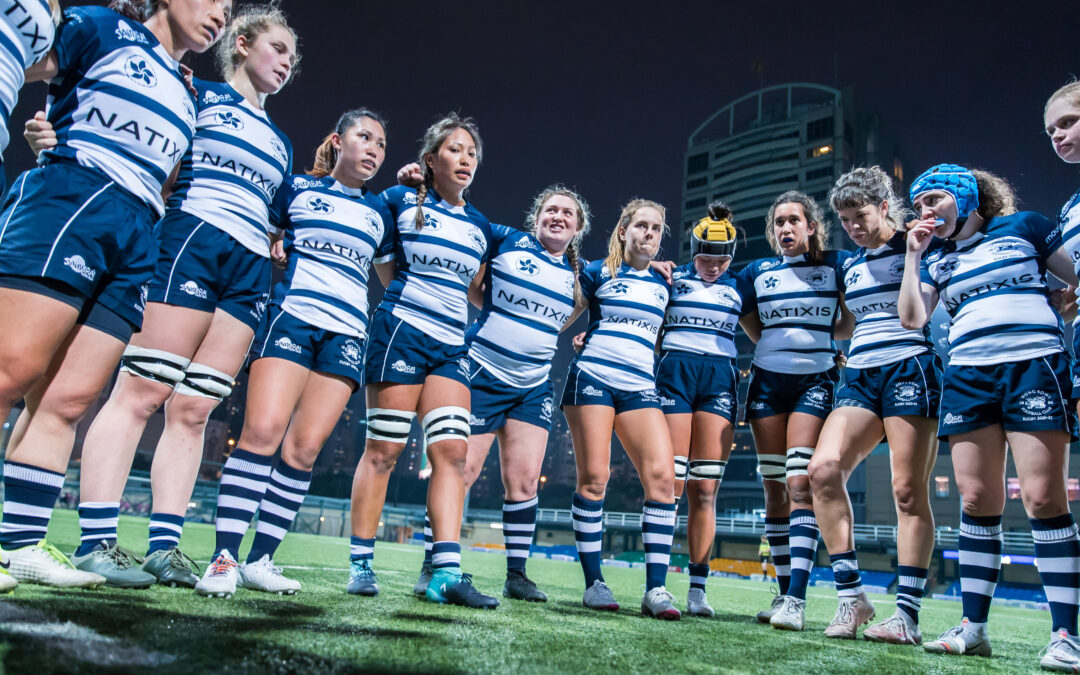 It has been a tough few years for everyone here in Hong Kong and around the world but the effects of Covid and the 2019 protests has probably taken the most toll on our women’s section here at Club, which had been building nicely previously. However, a brutally honest program review and some changes has led to our best preseason in years.

It started with off season strength and conditioning sessions run twice a week which kicked off way back in June. The sessions focused on providing the players with a solid athletic base to help performance and decrease injuries for the upcoming season.

The commitment and attitude shown by the girls was infectious and lead to lots of new faces coming down to give rugby a go. The ladies also ran a successful Come and Try Rugby Day to help add some depth to our community. All of this had us primed for when the rugby began in late July.

The introduction of S&C and Come and Try Days wasn’t the only change this season with a new Head Coach joining the team in Chris Garvey. Chris comes to Club with a wealth of experience including coaching at the Wasps in the UK and the national side here in HK.

Chris has brought a different energy and fresh eyes to the group and will no doubt be calling on his coaching experience to help grow the women’s program.

Chris as said he has been really pleased with how the squad responding so positively to a few core values on and off the pitch in his first 6 weeks.

“I’m loving being around a group of players who seem to be enjoying their rugby. With our camp coming up on the 11th September I’m confident we will continue to build on this and develop a solid platform across Fire and Ice to grow as individuals and a club”

The week after camp Ice will have their first competition game with the season opener against perennial women’s heavy weights, Valley, at HV6.

From the players side they have really enjoyed the pre season. They themselves have been working hard to contribute to not only personal growth but also that of the team. Women’s Section Rep, Roshini Turner has been impressed with the positive energy everyone has brought to the training sessions after a challenging 18 months.

“Plenty of new faces have added some needed energy to the squad.

Preseason under Chris has made us much fitter and given us a good base of core skills. Now it’s just up to us girls to grow within the structures Chris has put in place!

Personally, I’m looking forward to (hopefully) playing my first full season with HKFC, and a season where we live up to our potential!”

While there have been some losses across the teams, there has also been some old faces return and some new faces. This includes some talent from the UK North. LJ Crawford, Tilly Churm and Caitlin Simpson will all be bunking down at the infamous “Shing Ping Palace” for the season.

LJ is the perfect mix of Scottish/Geordie/Canadian. This unique up bringing has led to her being a great utility. Able to cover lock and backrow as well as flyhalf and the centers – we know all forwards say they can play in the backs but on this occasion its true!

Tilly and Caitlin will be solely bolstering the forward pack this season. Despite their young age both players have a wealth of rugby experience behind them.

Tilly was the captain of her county side, Yorkshire, as well having captained the DMP Sharks in the women’s premiership in the UK. The strong ball carrying lock is also an ace in defense which she attributes to her rugby league background.

Caitlin on the other hand is master of the dark arts up front and can play 1,2 or 3. “Simmo” has played women’s premiership in the UK as well as English u20’s and from the reports of all previous coaches has a bright future ahead of her in the game.

All 3 players are looking forward to finding their feet in Hong Kong and with their team over the next few weeks.

So while everyone acknowledges that there is still plenty of work for the HKFC Women’s Rugby Section community to do the willingness of players, coaches and support staff to contribute and grow this season has evident from the first session back in June and we are all excited to see where the hard work will take both Fire and Ice this season.