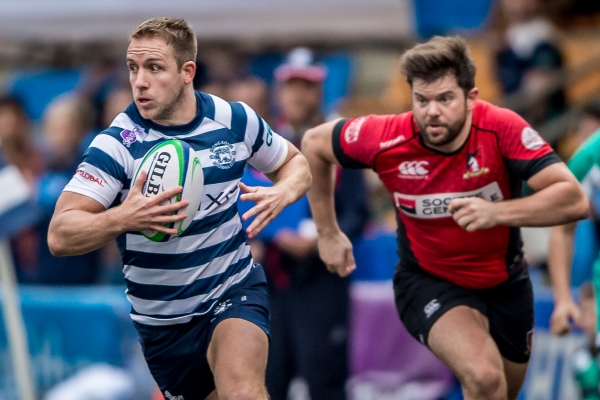 This weekend sees seven of the Natixis HKFC teams play in the Grand Championships semi-finals, all looking to progress to the Grand Finals next weekend.  With all teams either playing at HKFC or Happy Valley 8 it provides for a feast of knock out rugby.  The schedule of fixtures for the HKFC teams are:

Natixis HKFC Club defeated HKCC in the quarter finals last weekend 17-3, putting in one of their most accomplished performances of the season.  HKCC were the first to hit the scoreboard through a penalty to fullback James Love, however HKFC were the more attacking side in the opening 20 minutes. The hosts put a premium on ball retention and strung together multiple phases, spending an eternity camped on the HKCC line.

A lively Jamie Hood was the instigator of many of Football Club’s attacking thrusts and eventually at the 30-minute mark the HKCC defensive line broke, with Ben Willis finding the line.

Nate de Thierry was on target with the conversion to give the hosts a 7-3 lead and all the momentum with half-time approaching. De Thierry missed a chance to extend the lead in the 38th minute when he was offline with a penalty attempt, ensuring the score remained at 7-3 at the break.

The intensity lifted in the second half and it was clear each side knew their season was on the line.

De Thierry showed his brilliance from the tee, converting a tricky penalty from the sideline to stretch the margin to seven points. He was in the game again soon after, executing a perfect intercept in his side’s half and streaking away for what would have likely been the match-winning try.

However, Alex McQueen dragged him down on the line after an inspiring chase, an effort that stirred something in Cricket Club. For the next 10 minutes, they attacked with the most intent they had all match but it amounted to nothing, with HKFC soaking up the pressure.

“We defended really well, if we defended like that all season we’d be a lot higher up and in a better position. But because we didn’t have much ball, when we did get it we didn’t show enough patience with it and perhaps that speaks to our confidence levels.”

The home side struck the killer blow with 15 minutes remaining, with Will Munro crossing after some good work from Tom Isaacs and Charlie Higson-Smith. De Thierry’s conversion pushed the margin to 14 points, a scoreline that would remain until the final whistle.

“We built a lot of pressure,” HKFC coach Phil Bailey said. “We worked all week to play to a structure and we actually did it for the first time all year. We were strong defensively, we worked hard for each other and people stood up.

“We are coming good at the right end of the year,” warned Bailey. “We’ve got Valley, they are the form team and they are going to be hard to beat but finals footy is finals footy.”

Club now play Valley on Saturday in the semi finals and name the following squad:

Valley enter as favourites against HKFC after some sublime late-season form and have had the wood over their opponent, winning all three of the meetings between the sides this season.

“We’re looking good for the weekend and looking forward to it,” Valley coach Andrew Kelly said. “We’re finally at the business end of the season and I think the guys will be up for it.”

Valley will be without Ryan Meacheam who is away at a family wedding, Grant Kemp who is serving a one-week ban and Ed Rolston, who won’t play again this season due to a fractured jaw.

Kelly hopes his side can carry over their positive league form and is expecting a physical encounter against a Football Club side that are starting to play a consistent all-round game.

“Football Club have been pretty good over the last few weeks,” Kelly said. “They keep the ball well, they’ve got big forwards and dangerous backs that can attack as well. We’re going to have to be on our game.”

For HKFC, experienced winger Niall Rowark and prop Callum McFeat-Smith will be missing after sustaining injuries in their side’s quarter-final win over Herbert Smith Freehills HKCC. A number of other players are also under injury clouds and coach Phil Bailey well understands that his side face a redoubtable foe in a Valley side that knows how to get the job done when it matters.

“Even if we were fully fit we would have our work cut out for us,” Bailey said. “Valley have been one of the form sides all year and for the last three or four years, so it was always going to be a hard game no matter what. We need to limit our errors, Valley live off those scraps and they have got a lot of guys that have played professionally. They know what to do and they know how to execute.”

The Dragons had a routine win against Gai Wu last weekend, winning 65-0.  There were eleven tries in total for the Dragons, with winger Antoine Duplan scoring four tries.  Antoine was previously part of the Toulouse Academy and is currently in Hong Kong on an internship.

The semi final encounter against Hong Kong Cricket Club will be a much tougher affair as they had an unexpected victory against Tigers in the quarter finals.  The GC rules allow teams to drop six Premiership players down and with HKCC premiership team getting knocked out last weekend they will undoubtedly have a fully strength team out.

The Dragons picked up a few injuries last weekend but welcome the return of Tom McColl into the centre.

The Natixis HKFC Scorpions had a good quarter final win against Kowloon seconds winning, 45-24.  They now face a tough semi final against Valley.  The squad is:

Natixis HKFC Select beat Valley last week 41-19.  Select led at the break after a tight first half with the only try coming from winger Lasse Steuben.  The second half was, in more traditional Select fashion, a looser affair, with the pick of the tries coming from Simon Bourke and Cameron Mitchell.

They now face a semi final versus Discovery Bay Pirates who are always a strong team when they have their full compliment of South Sea Island players.  With both teams having chalked up one win a piece in the league and having finished second and third in the ladder, this will be an extremely tight game.  Select have picked up a number of injuries, none more frustrating than back rower Richard Sharpe who had put in a number of all action performances throughout the season, very much in the mould of Tim Rodber.

Natixis HKFC Bulls had a bye in the quarter final having finished second in the league.  They now play USRC Legends who finished a place below them and one win less than them in the league.  This again will be an extremely tight game, with both teams having beaten each other during the season.  The Bulls will be hoping that the extra weeks break will give them an advantage.

Natixis HKFC Sequins also had a bye last weekend but now face HK Scottish Bravehearts who beat them in last years semi final and finished one place below them in the league.

“I’m very happy with the result. Football Club versus Causeway Bay is one of the closest match-ups in the Premiership and it was a lot tougher than the scoreline suggests,” said coach David Wigley who was pleased with his side’s efforts on a day when everything went right for the Sports Road outfit.

“We started very well, at last. We’ve often started slowly this season, and it was a good time to put that right. We got a couple of tries early and that set us on track,” Wigley noted.

Two early first-half tries saw HKFC take a healthy lead with Jamie Bourk, celebrating her 19th birthday and her last game before departing Hong Kong for university overseas, putting HKFC on the scoreboard almost out of the blocks. A second try soon followed, coming off a driving maul as HKFC’s forwards handed a stiff challenge to their opposing pack. A similar move built around a driving maul at the close of the half added more points.

With both coaches predicting the backlines would be the difference makers ahead of the game, the match ran counter to form, developing as a physical battle between two accomplished forward packs.

“It wasn’t so much of a backline affair as I’d expected. All our players did well, but it was the forwards who carried the day. If anything, our backline could have used their possession better,” Wigley said.

“Our forwards took it to their forwards and beat them. It was the first time this season that our forwards have outscored the backs. We got in their faces and tried to stop the ball getting out to their wings and it seemed to work,” added Wigley.

Football Club kept up the pressure in the second half with Stephanie Sin scoring a 60th minute try, capping a well developed backline movement, before hooker Royce Chan Leong-sze added a try.

The prolific attack was matched with some dogged defence from HKFC.

“Our defence worked well. Causeway Bay always attacks around the fringes but we were prepared for that and effectively neutralised their offensives.

HKFC’s hard-fought win ushered their closest competitors throughout the league season out of the Grand Championship stakes, but the challenge now gets stratospherically harder with the route to the final going through Happy Valley.

HKFC will throw everything into their battle to hand Valley its first loss in 40 matches next weekend but Wigley knows it will be tough.

“Unfortunately, a few of our girls will be away for the game against Valley but hopefully we can put up a good fight. We haven’t put in a good shift against them this season and we really want to show what we can do,” Wigley asserted.

HKFC will have that chance with plenty of eyes watching next week as the race for the Grand Championship title hots up.  The squad is: