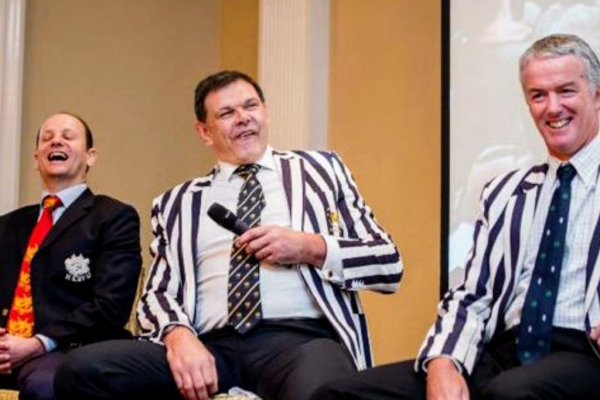 David ‘Edgie‘ ’Edge‘ ’Trigger’ Egerton came to Hong Kong in the summer of 2011 with his wife Amanda, son, William and daughter, Olivia. Amanda was relocating with work to head up the Asia operations of a major retail group and Dave was very much the ‘trailing spouse’ and always made it clear that he was retired.

Dave’s arrival at the Hong Kong Football Club coincided with the usual influx of players and new members after the summer and little fanfare was made of this legend of Bath RFC’s arrival as a new coach. Dave though immediately threw his heart and soul into life at the Club where he was the leader and energy behind the Rugby Section’s (at various times) Select, Scorpions and Dragons teams. He harnessed and reveled in creating a collective purpose resulting in a hugely successful and, anyone for those of us fortunate enough to be coached by Dave, happy, amusing and unforgettable 4 years. Those years have been fondly remembered by those involved in the recent weeks since Dave’s untimely passing.

Accompanied by his charismatic and impeccably-shoed batman “Champagne Jon Moore” they first took on the challenge of coaching the Select and Scorpions during the 2011/12 season, ably backed up by the iconic presence of Select team manager and doyen of Asian rugby tours Sean Purdie and Gaz Wilde as scorpions manager. It was an ideal team, that paved the way for the most enjoyable and successful period of rugby in recent years.

Dave made his game plan clear early in pre-season, contrary to the traditional loose and fast game that plastic pitches and 90 percent humidity in Hong Kong normally lend itself too; Dave was set on a forward dominated game with a rock solid rolling maul being key and only releasing the gifted back line once complete submission of the opposition towards had been achieved. Training sessions for the forwards were largely built around a succession of mauls which Dave himself loved to jump into (elbows and knees pumping) to ‘demonstrate’ the dark arts.

Dave’s first season ended up with an unbeaten Scorpions team winning the Grand Championships at Kings Park against a highly loaded Valley team. Dave had thoroughly prepared for the game, his complex hand written notes for the pre-game talk became the stuff of legend. The notes say “simple and direct” surrounded by a wiring chart – dog fight, 1 man 1 bullet, collective, precise skill execution. The game was a brutal affair with no love lost between the local rivals. After a frenetic first half, Scorps went into the break down a couple of points… Dave’s team talk at half time was exciting and memorable. He had a big grin on his face and was hugely excited – ‘It’s a dogfight! “It’s a dogfight! All year we’ve been waiting for this, man or mouse boys? Who’s standing up today?’ The team of course stood up and won in the last minute…. contrary to Hong Kong tradition two of the three tries scored that day by Scorps were from rolling mauls…which of course Dave told us was all part of his master plan.

Dave’s second year was a real testament to his character; the challenge was to exceed one unbeaten grand championship winning team, two team concurrent winning teams in the same season. With a fearsome Scorpions team dominating their league under the leadership of Greg Hayes and marching to a second successive unbeaten season and Grand Championship, his second focus in 2012/3 was the Mighty Select. Traditionally a social team who were most renown for their off-pitch ability and legendary tours; Dave whipped them into shape and embraced the fine sessions, the singing and the camaraderie. His signature ‘Ring of Fire’ shook the bus on return trips back from away games and ‘near pitch perfect’ renditions of Elvis hits reverberated around the bus shelter and to Sportsmans to the bemused gaze of the local Cantonese taking dinner. Select cantered to an unbeaten grand championship winning season, beating club rivals Bulls in the final.

”On the way to play at Sandy Bay via Wong Nai Chung Gap road I pointed out the route the Japanese had taken during WWII to Stanley and the redoubt where the Canadians made their last stand. Following two resounding victories, Select went back to the club for the usual post match fine session. All went well, and as usual at the end any missed fines were allowed to be raised – Dave jumped up – ‘Purdie! Pint fine! Instead of focusing on the game and the build-up, I got a history lesson!”

Dave was also brilliantly poor with name recollection. Our Japanese prop was ‘Kamikaze’ for three years; one of the Italians was ‘Bunga Bunga’ and probably best not to mention some of the other nicknames in today’s more sensitive environment although there were plenty of animals: the chicken, the rhino and so on. When playing an away game at Causeway Bay mid-season, Dave was berating the Scorpions hooker for some wayward throwing in; ‘Awful Atko, Awful! Sort it out!’ To great hilarity on the sidelines, Atko tapped Dave on the shoulder and said ‘But I’m not on the pitch.’

There were many who benefitted from the paternal side of Dave, he really cared for his team and their well-being. He was an exceptional motivator of people and had an astute ability to notice if someone was having a tough time or needed a pep talk. He was the master of the surreptitious but hugely motivating complement. Often he’d sidle up to you in the sportsmen’s and check in; he also had an uncanny knack of appearing behind you on Queens Road at the moment you needed an overly zealous back slap and some blunt talking to get you back on track. Towards the end of Dave’s time in Hong Kong, one of the players tragically took his life, which shocked us all, particularly Dave. The player was one of the younger members of the squad which made it even harder. Dave was at the forefront, rallying the troops, checking with his family and everyone’s welfare.

Dave went on to coach the Dragons to a Grand Championships win in his final year in Hong Kong (his 4th Grand Championship in years); and was named the ‘Challenger’ in the annual Taipans game which resulted in another legendary night at the Club.

Although only here for 4 years, Dave touched many people and was sorely missed when he left in 2015. In spite of his significant physical presence and impeccable rugby pedigree Dave was always understated and unassuming about his playing days, but had some cracking stories often with himself as the butt of the joke. He loved rugby, it was a way to bring people together and create the magic and enjoyment of channeling a group of individuals to have a collective purpose and will – “remember a team of average players will always beat a collection of athletes”.

Coach, songmaster, friend and mentor, thanks for the memories Dave, my God, we will miss you but will not forget you.